The Board has been chosen to represent the local area. Board members are:

Three years ago I sought election for the first time to the Board, having previously been an ‘observer’ at meetings. During the last three years I have learned much about the governance of Boyndie WFC, and tried to put the perspective of Josephine Public to the Board’s work.
Whilst still living with my family , (all six of us are Boyndie investors) on a croft near Maud, we do have a new addition to the family since I first stood for election– a 10kw wind turbine on a 15m pole. This very small development in wind turbine terms, as well as taking two years of my life, gave me insights into the problems of getting renewable energy projects off the ground. It made me eternally grateful for the work Energy4All did with Falck to create the Boyndie Wind Farm Coop, and with it the opportunity for ordinary people in the ‘hosting’ community to benefit from investment in renewable energy, without having to personally own the land or go through the time consuming and expensive ‘developmental hurdles’, perhaps unsuccessfully.

I strongly believe that affected communities should have rights to invest in on -and off-shore wind developments. This wider ownership of energy production, would encourage accountability of planners and power generation network suppliers, as well as fostering more responsible attitudes towards energy usage by end users. My strengths are in the areas of co-operation and communication. 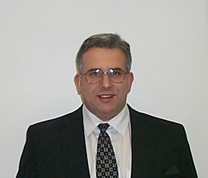 I have spent my working life in the retail and tourism industries, having served at both operational management and board level in both. I live in Boyndie and my home is one of the closest houses to the turbines. Naturally, this prompted me to take a keen interest in the wind farm development right from the start, and becoming a founder director of the co-op enabled me to promote active community participation in local business and local people having a say in running their communities, both of which are passions. I runs two local charities, The Boyndie Trust and The Banffshire Partnership as my paid work.

I was born and brought up in Hamilton, Lanarkshire in 1952 and lived there until February 2006.

On leaving school I joined Clydesdale Bank in Motherwell and worked my way through the ranks becoming a manager when I was 28 in the International Division in Glasgow. I had various managerial jobs, primary in Treasury, Asset & Liability Management and latterly in Treasury Compliance & Operational Risk. In 2000 I moved to work for the parent company (National Australia Bank) although I was still based in Glasgow. Following a restructuring in the organisation, I was made redundant in February 2006.

My wife and I have had a house in Portsoy since November 2002 but have been coming to Portsoy for holidays for about 35 years. On moving permanently to Portsoy, I secured a job as an Assistant Registrar with Aberdeenshire Council, which I have now left. I am also Chairman of Banffshire Partnership Ltd and Chairman of the Portsoy District Community Association which runs the Pavilion and playing fields in Portsoy.I am a Member of the Chartered Institute of Bankers in Scotland and have an MSc in International Banking & Finance.

I have served as a director of Boyndie Wind Farm Co-operative since the AGM in May 2008.

I am 57 years old and a partner in Johnston Carmichael LLP, Scotland’s largest independent firm of Chartered Accountants, and work out of their Fraserburgh office. I have several clients who have Turbines so I have a professional interest in wind energy as well as a personal one. I have been on the Boyndie board for 7 years, now the last 3 as Chairman.

I have lived in Banff for some 26 years and during my time in the town have been Chairman of Banff Academy School Board and Banff Round Table.  I am currently a director of Fraserburgh Development Trust and a Bakery Company.

I am a season ticket holder at Pittodrie and have enjoyed the last 2 years after many years of famine! My golfing report card continues to say “Michael is enthusiastic but he could do a lot better”.

At present I am self employed doing mainly building work, tree surgery and firewood processing. Before moving to Portsoy in 2005 I was a director with one of Rentokil Initial’s main divisions with my last three positions being Sales and Marketing Director, Operations Director and Managing Director. My last job involved running twelve huge laundries spread throughout Scotland, England, Wales and Northern Ireland and employing over two thousand full time employees.

I believe that the more you put into your community you more you get out of it. Locally I have been an office bearer in Deveron Canoe Club, Banff Chess Club, Deveron Gymnastics, Skip to the Beat, Portsoy 75 Club, Portsoy Community Council and Portsoy Primary School Parent’s Support Group. In my spare time I am also the local Sustrans Ranger for the stretch of the National Cycle Network (from Whitehills to Cullen) that passes right by our wind farm. As a warden I am responsible for ensuring that the signs are kept clear of vegetation and replaced if damaged or vandalised. If you like to go to the theatre you may well have seen me in most of the Portsoy Players productions and pantomimes.

In terms of energy use I have been very interested in alternative technologies for decades, heat my house with wood and find the current carbon debate engrossing.

I was born an brought up in Dundee. On leaving school I joined the British Linen Bank, which then became the Bank of Scotland. There I met Ross (he was a Director of Boyndie Windfarm until he sadly passed away last July).  We married in June 1974 and have 3 children. The bank moved us all over the country, and I spent a lot of time getting involved with school activities. I was on the PTA and taught a group of youngsters to play badminton.  I was a Guide leader when we lived in Fochabers , where I also delivered Meals on Wheels . Living in Orkney I spent time helping out in the Oxfam shop.  We moved to Whitehills 20 years ago and I am currently Treasurer of Whitehills and District Community Council , I am also an Elder of Whitehills Parish Church.

News from other Energy4All Co-ops

ENERGY4ALL
CO-OPS
Below are links to some of the other Co-ops in the Energy4all family:

Manage Cookie Consent
To provide the best experiences, we use technologies like cookies to store and/or access device information. Consenting to these technologies will allow us to process data such as browsing behavior or unique IDs on this site. Not consenting or withdrawing consent, may adversely affect certain features and functions.
Manage options Manage services Manage vendors Read more about these purposes
View preferences
{title} {title} {title}